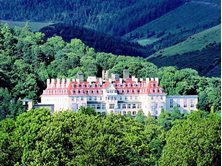 Peebles Hydro sits right in the heart of the Tweed Valley. It’s the ideal location for easy access to both the big city in Edinburgh, and the surrounding Scottish Borders.

The Gin Palace at Peebles Hydro

Peebles Hydro has been on a huge improvement journey over the past couple of years, and one of the most exciting additions is the Peebles Hydro Gin Palace.
Categories
Popular tags
View all
website created and maintained in Peebles by tstf.co.uk
All contents copyright © 2011 - 2021 tstf.co.uk. All rights reserved.